On June 30 we hosted our first official BC Seed Trials Field Day at Local Harvest Farm in Chilliwack.

This was our first chance to bring in other farmers to view and evaluate the beet varieties and the first chance that farmers could find out which variety was which! It was a beautiful though windy day in Chilliwack and despite heavy Canada Day traffic, we had a turnout of 15 people for the event!

BC Seed Trials Lead Researcher Alex Lyon led the group through an evaluation of the 10 beet varieties in the field which are as follows:

(*Note: Not all varieties were planted at this location).
We have had a chance to view this crop many times throughout the season but there was something special about doing so with a larger group. Many great conversations took place as people shared their opinions about the different varieties.

All the beet plots were staked and labeled but the beets had grown up tall over the stakes, so we put numbered flags to indicate each variety.

To start the trials a 10-beet section was harvested in each variety so participants could view the roots. One of the roots was cut open to see the patterns in side – especially important with the striped Chioggia varieties. This was also a chance to see how quickly the beet oxidized and started to brown and lose its colour. 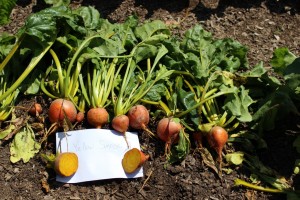 Once everyone had a chance to evaluate and record their beet observations they were all asked to choose their one favourite Golden beet and one favourite Chioggia beet. Participants used flags to mark their picks!

The winners at Local Harvest were: 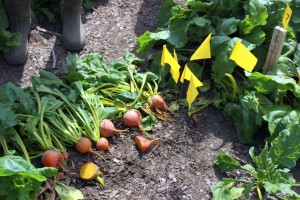 Local Harvest is just one of ten BC farms growing out these beets so we can’t wait to to see results from others sites! Pitchfork Farm has also been evaluated and harvested and UBC Farm will be done on July 13.

After the group evaluation Alex and I took the chance to take some measurements on the 10 beets we had harvested. We used a custom-made caliper to quickly measure the width of each beet. WIth two people we were able to very quickly measure 10 beets of each variety, giving us some data about their average diameter and variation in diameter. 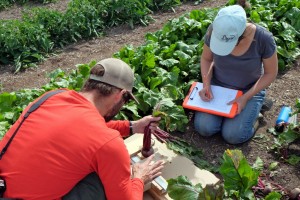 Once we had taken these measurements the rest of the crew followed behind harvesting the reminder of the crop which we planned to use for our Unbeatable Golden Beet Tasting at UBC Farm on July 9. As part of the trials the beets actually remain the property of the farmer, but as we had an event coming up, we purchased the beets from Dan. Although UBC Farm also has these same beets (and more) in the ground, they were planted later and were not quite ready for harvest.

After we had finished with the beet evaluation and harvest we had a chance to check on the status of Dan’s Touchstone Gold beet seed crop. These beet roots were selected in the fall by Dan and Mojave Kaplan of Planting Seeds Project and put into storage. In the spring they were taken out of storage and further selection was made to further remove beets with undesirable traits. They were then planted on March 19. 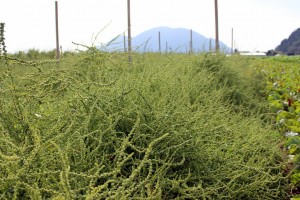 This crop is now well on its way to seed – in full flower and producing a beautiful aroma! Many of the plants have toppled over but still have good looking potential for seed yield! Beets can yield up to one pound of seed per plants so with 900 plants in the ground, even getting a portion of one pound per plant will leave Local Harvest with a good supply of Touchstone Gold seed which has been well selected

That’s it for now! Keep posted for harvest updates from other participating farms!

Thanks again to Alex Lyon for leading us through the Field Day and Dan and Helen Oostenbrink for hosting! And thanks also to all the local folks who came out to participate. We still have more beet seed Field Days coming up in Saanich and Prince George!