Saturday, July 9 was the tastiest day of the BC Seed Trials so far – The Unbeatable Beet Tasting! The tasting, held at the UBC Farm Saturday market, was a chance to showcase 10 of the beets in the trials and get consumer feedback on their favourite varieties.

While much of the BC Seed Trials work happens in the field with farmers and researchers, this beet tasting was a great opportunity to bring in the public – important end users for farmers’ produce!

This tasting was inspired by work done in Oregon by the Culinary Breeding Network. One of the CBN’s goals is to increase communication and collaboration between plant breeders, seed growers, fresh market farmers, chefs, produce buyers, food journalists and other leaders in the food community in order to develop more relevant and desirable cultivars.
See the Beet Tasting on CBC News here! (Starts at the 7:15 mark) 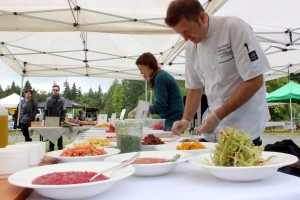 Key to the success of the tasting on Saturday was the involvement of Chef Rob Cleland, of Ash Street Bistro. Rob frequently works with UBC Farm and was excited to be part of the tasting. We were equally excited about working with Rob as it is a pleasure to be working with such an enthusiastic chef! We also saw the opportunity to learn from Rob more about the culinary aspects of beets after spending so much time focused on their agronomic aspects.

Planning for the event has been weeks in the making as we worked out the details of an event type none of us had ever organized before. Actually, in retrospect, much of the planning was actually based around a great picture from the Culinary Breeding Network!

This image gave us inspiration from its beautiful presentation which we imagined would be equally inspiring to the public. By holding the event at UBC Farm’s Saturday Market we also knew we would have a willing and eager audience for the tasting who appreciate good food. 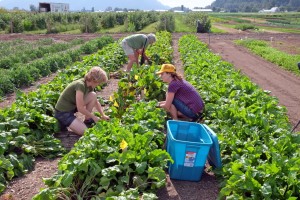 Preparations for the event started at the June 30 Beet Trials Field Day at Local Harvest Farm where we harvested the first of the beets to be used in the tasting. While the beets are growing in trials at UBC Farm as well, the crop at Local Harvest was planted several weeks earlier and was more mature than the UBC Farm crop. We supplemented this harvest with our second beet trials harvest from Pitchfork Farm a few days later – ensuring we had a sufficient, if not extra, amount of beets for the tasting. 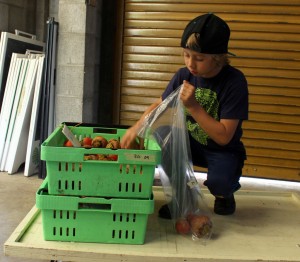 The next step in preparations involved getting the beets to Chef Rob. With the help of my seven-year old assistant, we packed up the beets, being sure to keep the individual varieties properly labeled. We dropped the beets with Chef Rob at Ash Street Bistro in Vancouver, where I got to meet him for the first time. Rob’s enthusiasm during our visit was contagious. He was looking forward to working with his colleague, Conor Higgins, to create a wonderful beet-focused dish for the tasting. He was excited about the fact that, as of yet, they had no idea what they were going to make but knew they would make something great!

Besides preparing a beet-focused dish, Rob and his team would also be roasting each of the beet varieties so there would be both a cooked and a raw beet portion for guests to taste and evaluate.

While Chef Rob and his team were working  on what to do with the beets, our own organizing team had its own tasks to attend to. BC Seed Trials Lead Researcher Alex Lyon was finalizing the tasting ballots for event attendees, while I worked with Shauna Mackinnon (my Bauta Initiative colleague) to finalize set-up and display details on Saturday morning. All the while we kept the event active on our FarmFolk CityFolk social media channels. Registrations came pouring in on the day before the event – perhaps because of our social media presence; perhaps because of the event being highlighted in the UBC Farm newsletter the day before; or perhaps because the less-than-optimistic weather forecast persuaded folks to change their camping plans and attend the tasting instead!

After managing to get back to sleep I woke up to a much tapered off rain and remarkably warm weather as I got ready to head out to UBC with Shauna. We were both well prepared for the rain…only slightly begrudgingly! 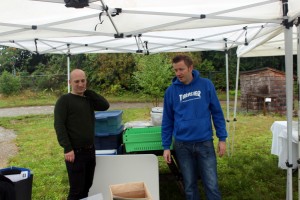 When we arrived at UBC Farm Chef Rob and Conor were already on site and unloading their gear and the beets. They had been up since the early hours preparing for the day.

We had a rough idea of what we wanted for a set up but were still planning to make it up as we went. Rob brought a selection of dishes and tools to ensure we had the beets well displayed for the public and we brought a fair amount of props as well. I suspect Rob may have brought a skateboard with him also… 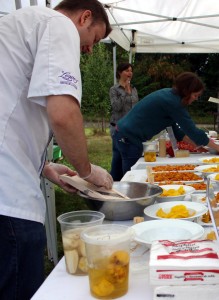 For the next two hours we worked at getting things set up as the rain intensity ebbed and flowed. We actually altered our original set up plan in order to ensure the presentation, and the attendees, would stay dry.

We set up a few signs around the tables with interesting beet facts and got ballots ready while Rob and Conor started preparing the beets for presentation. The roasted beets needed to be skewered with a toothpick while the raw beets would be sliced on a mandoline to get thin uniform pieces. At the same time, Alex headed out to the fields to pull some fresh beets from the ground to put on display.

Although it was still raining a bit, and we were still half an hour away from event start time, folks were curious about what we were about to and started poking around the table as we were setting up – it was looking like we might have some good interest in the tasting!

Once we were ready to go at 9:30 it was pretty much a non-stop flow of folks coming over from the UBC Farm market. Despite the rainy weather, market-goers were happy to spend a lot more time to partake in the tasting. Of course, we made attempts to entice them over as well. On several occasions I took the beet dish Conor was preparing (more on that below) on a plate and walked through the market to give market-goers and staff some incentive to come try out the tasting…

We were tasting two types of beets – Golden Beets and Chioggia beets which were all grown as part of the BC Seed Trials. The seed for the beets came from commercial seed companies, Pacific Northwest seed companies, and BC seed companies. Each participant was given a ballot and asked to rate the beet on three characteristics using a 1-5 scale: 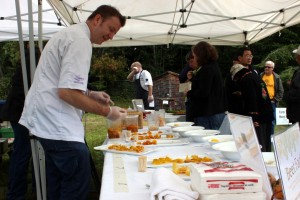 The Golden beets were laid out first and Chef Rob mingled with guests as he continued to prepare the Mandolined beets and talk about the qualities he looks for when working with beets. It was great eavesdropping on his conversations to learn the different ways of preparing beets or how to avoid oxidation once they are cut. His energy in keeping the event guests engaged was impressive!

As participants came through we also learned there was a wide range of opinions about beets! I clearly remember one gentleman in particular who had no interest at all in eating beets, even though he frequently ate raw vegetables in his diet. But with a bit of persuasion he was happy to participate in the tasting. It turned out to be a good move! 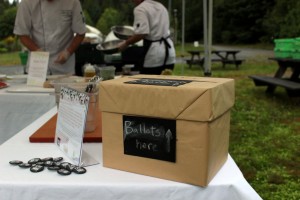 By the end of his adventure he learned that he quite likes the beets when they are raw, but still did not like them cooked. After submitting his ballot he headed down to the UBC Farm Market to grab a bunch to take home and was asking when the beets from the trials would be ready! This instance, for me, was the highlight of the day. 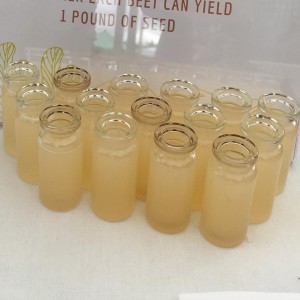 After tasting the Golden Beets, participants were given a palate cleanser – a golden beet lemonade Rob prepared with syrup from Touchstone Gold beet peelings. The lemonade was served in small test tube bottles which were the perfect size for a quick palate cleansing shot! I admit, I may have had a few shots beyond my palate cleansing needs…

The lemonade was a big hit, with participants being enthralled with the use of beets to make a lemonade. Oh, there were lemons in it, too!

After undergoing the tasty palate cleansing participants moved on to the Chioggia beets. These are always a consumer favourite because of the red and white striped interior this beet displays. Sometimes called the “candy cane” beet, this Italian heirloom variety makes for a great presentation. Two of these varieties were from the Pacific Northwest, one from BC’s own Sunshine Seeds and the other from Uprising Seeds in Washington State. 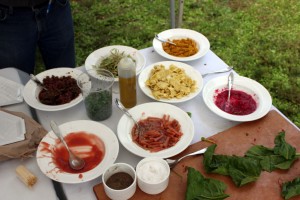 After tasting the Chioggia beets, participants had another treat waiting. Rob and Conor prepared a dish using all the different parts of the beets – roots, peels, stems, and leaves. This dish, which came to be known as beet tacos throughout the day, was a great way to demonstrate the versatility of this root vegetable.

The beet tacos were a great way to entice market goers over to the tasting area. On several occasions I walked through the market giving samples to market-goers and vendors alike. 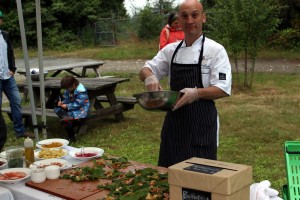 The ingredients for the beet tacos included (I won’t do these descriptions justice!):

As you can tell this was an action-packed day and we were on our feet from morning through the afternoon. In the end we ended up having quite an excess amount of beets – but not to worry. We all took a bit home for our own cooking while I took the remainder – close to 75 lbs – to the Carnegie Community Centre downtown, where I know they will be put to good use.

Ok – it is time to get this blog posted before it’s too late. Thanks again to Rob and Conor; to Alex and Shauna; to the UBC Farm team; and to everyone else who helped make this tasting a great success. We look forward to the next one!