For the past months we have been deep into evaluating beets! It has been a real pleasure visiting the farms and hearing farmers’ insights into the different varieties.

The UBC Farm beet evaluation, which is the most comprehensive, was completed in mid-July. BC Seed Trials Lead Researcher, Alex Lyon along with UBC Farm Seed Hub Coordinator, Mel Sylvestre spent three days doing a very thorough evaluation of the beets at UBC Farms, which included a few varieties which were not planted at the mother sites.

Alex evaluated the beets for a range of root and leaf characteristics and took many pictures to document each variety as well.

One of the pictures is too look at a group of the beets together – here in groups of ten or so – to observe the shape and characteristics of the roots. Here we can see patterns in shape as well as colour and how consistent each is within the varieties. In the image at the top of this blog you can see a bit of variation in colour as well as roots shapes which are mostly round but have some tapering into a slightly cone shape to very cone shape (compare the fourth beet from the left with the fifth beet from the left in terms of shape – as well as colour. If displayed on their own you may think they were two different varieties!).

Here are some sample images which are quite useful for continuing evaluation:

Here, as discussed above, we get to see the beets up against one another to observe size, shape, colour, root smoothness, root hairs, root taper, root disease, as well as the width of the leaf stems (petioles). With the meter stick it also gives us a sense of their size (which will vary with days from sowing).

Next, we get to see the beet leaves and stems. This gives us a sense of the size of the beet leaves which is important when bunching. We can also get a sense of stem colour and length. We can also observe disease and pest damage in the leaves. This image here is of Golden Grex from Fedco, which was one of the tallest varieties at every site. 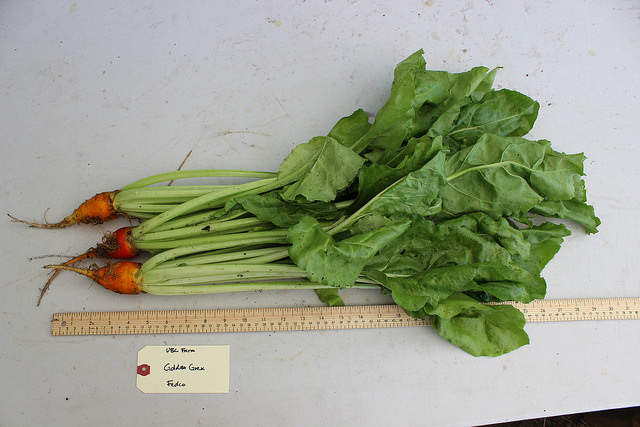 And, of course, we can cut the beets open to get a look inside to see what kind of patterns exist. This is especially interesting with the Chioggia varieties to see the red striped patterns inside! 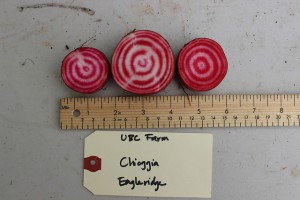 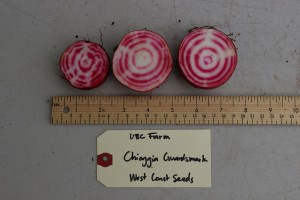 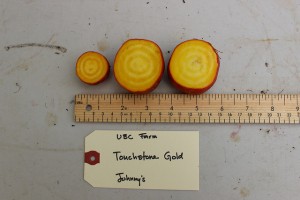 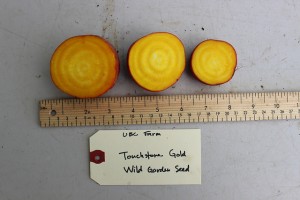 While UBC Farm has a larger set of trials, the individual farm sites are also very important in seeing how the varieties perform in various environments.

At Westham Island Farm the beets got off to a slow start due to a long period of hot and dry weather at the beginning of the year. We were discussing a replant while watching the weather as the forecast had called for imminent rain. Sure enough the rain came that same evening and we got good germination on the beets and good recovery.

I did the germ evaluation on June 6 and took the opportunity to do a bit of weeding while I was there.

The final beet evaluation at Westham Island Herb Farm took place on August 2. I walked the fields in the morning with Sharon Ellis and got a good look at the crops. Most noticeable at Westham Island was leaf damage from leaf miners which are a known pest at the farm. I took pictures of each trial from above to get a quick visual of the damage. Even from the images you can see the variation in damage. 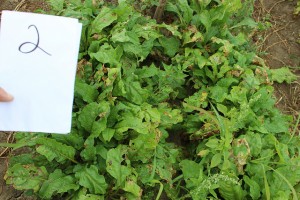 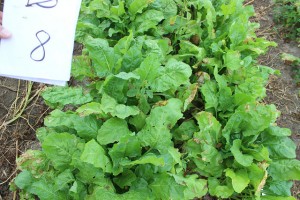 While this does effect the beets’ display qualities there were still lots of nice looking roots (I didn’t clean them up as much in the field as Alex did at UBC Farm). Westham Island is a very windy site which can cause the soil to dry out quickly, but Sharon has done a good job of keeping these beets well watered. 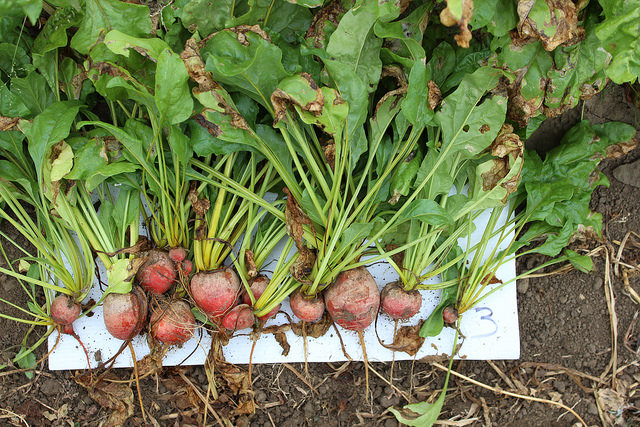 After getting a look at some many different roots there are a few things we really started to notice while doing the evaluation at Westham Island:

Now they are getting ready to plant spinach at Westham Island…

Later that same week, on August 6, I made it to Vancouver Island to visit Charlene and Bob Sieffert at Lazo-Tyee Farm. The Siefferts are one of two conventional farms in the trials this year and I believe their farm is as big as all the other farms combined several times!

The Siefferts already grow a large number of beets for bunching and selling at their farm stand including Red Ace, our check variety and Touchstone Gold, which is represented twice in our trials – from Johnny’s and Wild Garden Seeds. So these trials were quite useful to them. However, one challenge they had was in the planting. They do all their planting with a machine – three rows, with a “56-hole belt on slow speed”. This planting method staggers the beets into 3 double rows with beets in each of the 2 double rows spaced about 2 inches apart. They do no thinning and just let the beets squeeze into whatever space they can. Planting by hand, and then thinning was a bit tedious for this large scale operation! Here is a shot of theirtypical planting:

Conducting the evaluation with the Siefferts was a treat as they truly approached it as if something was at stake. For them a failed beet field represent thousands of dollars in loss. Charlene was very thorough with each variety to ensure she was getting a good sense of its characteristics. One important quality she looked as was their stem strength/brittleness. This is crucial because they harvest their beets by machine which, once they are loosened from the ground, get pulled up by their stems into the harvesting mechanism. Below is a shot of the machine they use (not my best picture!). It is an older machine made by a family in California who they have had great phone and email support from in keeping it running! 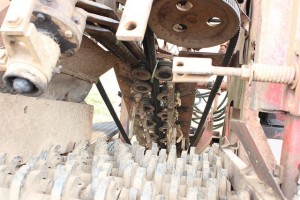 If you’ve never seen one of these machines at work here is a short video showing a more advanced machine at work harvesting carrots – giving you a good sense of why why stem strength is so important.

We now have three sites left to evaluate and can see what kind of patterns emerge. We are already well acquainted with the unique characteristics of each of these beets which were consistent throughout the sites we visited. But with all the data sets in it will be interesting to see what else arises.

One of the things we didn’t do was make bunches of the beets with the farmers at each site. This might have been a good visual to see how they would look while on display. We may have also learned some more traits about the beets about how they handle when being bunched.

That’s it for now – watch for our next post soon!…